It’s been a while since my last post. I’m back in Cumbria now and only popping back up to the park for the odd day or two to get things done. From the outside it may look like things are slowing down, but in reality this is the bit when the serious work happens. It’s the bit where I look back on all the research and ideas I’ve been accumulating over the past few months and shaping them into some tangible, physical form.

A large part of my residency has been just looking at the landscape and observing it. Looking beyond the tourist gaze and seeing how it works. I’ve really enjoyed exploring the area through photography. One of the longest lasting images has been that of the damaged ash tree plantation in Inverlochlarig Glen. 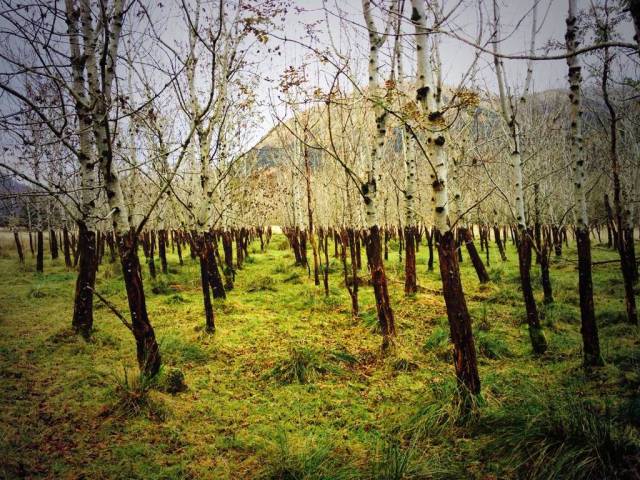 I saw this quite early on in my residency on a showery day when I just went wandering nowhere in particular. I was struck by the uniformity of the line between the dark lower trunks and the white bark above. The regularity of the planting – in dead straight rows added to the visual impact of the piece. The scale of it was impressive too – there must have been over a thousand trees identically banded in this way. Getting down to the level of the line created an optical illusion of a false horizon. When I first tweeted the picture many people thought it had been photoshopped. OK so I sometimes tweak the colour a tad to bring out the effect, but the whole thing is 100% genuine. The scale, precision and attention to detail had all the elements I try to instil in my own work. Only on this occasion I doubted this was the work of an artist.

At lunchtime I called into the rangers office in Callander and spoke to one of the ecologists. Her initial thoughts were that it was caused by deer grazing on the bark. Grazing is a big issue. Deer love the soft bark of new trees. There are examples nearby where the constant grazing by deer has created bonsai plantations. The trees are well established and mature, yet never get above 18 inches high – new growth being eaten annually.

While I like the idea that this was an art installation made by deer, I was initially sceptical as there was the standard 8ft deer fencing around the plantation. Also, the height was so precisely uniform. And it was on every tree, but not on any of the trees outside the plantation.

Following a bit more conversation on twitter, a tree specialist from the Forestry Commission had another more plausible explanation – that it was caused by leaving on the bark guards that protect trees from deer grazing for too long and shocking the trees:

“Tubex tree guards have caused the lower part of the trunks to try and behave like roots, due to their enclosure, high humidity and loss of climatic action on the bark.

You can see lesions on the stems below the ‘tide line’ that may have been caused by the guard abrading the stem or else browsers removing the nutrient rich bark. There may also be evidence of adventitious roots and or shoots.

Leaving the tubes on, may have stressed the trees sufficiently to make them more prone to the attack of Pseudomonas savastanoi pathovar fraxini that is causing the black lesions further up the stems above the ‘tide line’ of the tubes.

Judging by the ground vegetation, I would suggest that this is an ex-agricultural surface-water gley, that may have some water-logging issues, hence the Juncus effusus and fallen trees in the background, throughout the stand.”

This would at least explain the uniformity of the horizontal line. If this was man made, then at least I could file it away as a potential method for something else in the future – just needed solving the long term damage to the crop value.

However, there seemed to be a problem with this theory. A couple of the park rangers I discussed it with thought it was impossible for it to be caused by bark guards as some of the trees had split into two branches lower than the line. If it was caused by bark guards then the tree wouldn’t have split within the tubes, or at least one of the branches would have a tide mark at a different level. If it wasn’t tubes and too uniform for deer, another possible cause maybe flood damage.

The plantation is certainly close to a water course and it would explain the absolute horizontal effect. My doubt with his was the height, but not knowing the land and how fast the water level could rise or even how far it would rise that far up the glen I was open to accepting this cause.

So, there it was. Flood damage. Recent floods elsewhere in the UK show just how high rivers can go in a wet season.

That was until BBC Radio Scotland decided to feature it on their weekly Out Of Doors programme. So last month I went back out there with presenter Mark Steven and local wildlife expert Edward Chadfield. Apart from completely dismissing the bark guard theory as nonsense, they were convinced it was grazing after all. Yes, there were certainly teeth marks on what we could see of the trees. There was even a deer carcass which suggested deer certainly get in. We even saw a herd of red deer scarper up the mountain behind. Though to be honest, we didn’t actually see them amongst the trees, or go round the perimeter fence to see if there was a bit missing.

a typical grazed trunk on a nearby tree

teeth marks on nearby tree indicating grazing damage. Note the difference in colour to those in the main plantation

You can listen to the article here from their weekly podcast:

The jury is still out as to the cause. Most of the explanations have been made on the basis of photos alone. Even with the radio we only observed from behind the deer fence. Maybe the best person to have asked would be the person whose land it was in the first place. They probably know exactly what caused it.

Regardless of the cause, it’s still a stunning effect. And while I’m working on another project that looks at farmers as designers of the landscape I’m interested in the strong aesthetics created where the man-made plantation meets the serendipity of natural causes.

My original proposal for this residency was to create temporary installations that accentuate the many uses of this perceived natural landscape. Making small interventions in the normal working practice to create strong images and get people discussing them. Just like this. Darn! I so wish I’d thought of this first…